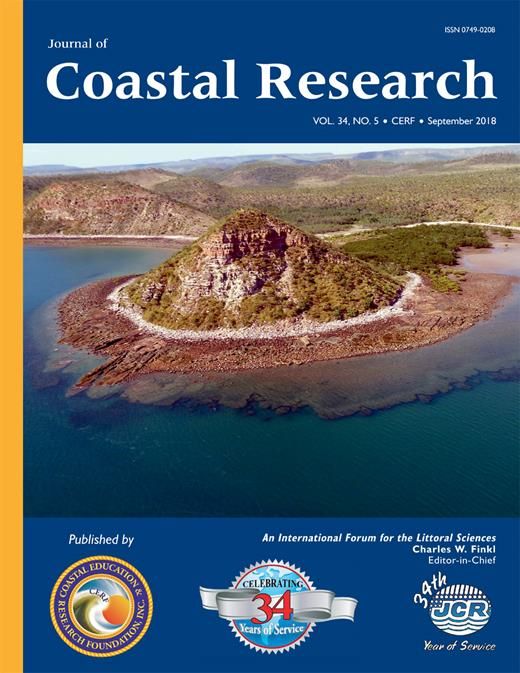 Alongshore Classification and Morphometric Analysis of Coastal Belts: The State of Oregon, USA

Classification of the state of Oregon coastal belt (western United States) was based on the interpretation of satellite imagery using the Biophysical Cross-shore Classification System (BCCS). This seven-county, 480-km stretch was subdivided based on coastal archetypes that formed distinct bio-geomorphological and ecological sequences on both alongshore and cross-shore axes. Shore-parallel and shore-perpendicular units were concomitantly determined by cognitive inspection of satellite images, in which cross-shore archetypical sequences were observed in the first instance to have alongshore spread that could be secondarily codified in terms of alongshore catenas. Because shore-normal transects encompass marine, coastal, and terrestrial environments that have a shore-parallel width, it was possible to extrapolate cross-shore classificatory units into alongshore stretches called domains. Characterization of alongshore domains was based on conjoining archetypes into catenary sequences that typify coastal belts both alongshore and cross-shore from adjacent offshore areas to several kilometers inland. Compilation of coastal belt catenas showed that promontories and headlands, which are composed of resistant igneous and metamorphic rocks, function as anchor points along the shore and are interspersed by sedimentary (littoral) coastal belts that contain mainland and barrier beaches backed by dune, wetland, flat (estuaries), or upland archetypes. A consizement of several alongshore domain catenary sequences within a particular coastal segment thus formed an overarching super domain. Typical alongshore super domains consisted of the following sequences: Barrier-Beach-Dune (Ba-Be-Du), Barrier-Beach-Dune-Wetland (Ba-Be-Du-W), Beach-Dune-Upland (Be-Du-U), Beach-Dune-Wetland (Be-Du-W), Beach-Cliff-Upland (Be-Cl-U), Beach-Wetland-Flat (Be-W-F), and Rock-Cliff-Upland (R-Cl-U). Morphometric analysis of each county allowed the determination of specific characteristics for each super domain (e.g., alongshore length, percentage of the county coastal belt, and percentage of the Oregon coastal belt). Furthermore, archetype morphometrics were calculated to show which cross-shore archetypical features were most prevalent along the state's coastal belt. This examination of the Oregon coast showed that the alongshore classification of coastal belts on a regional scale, which is based on cross-shore biophysical interpretations, offers the opportunity to characterize offshore, inshore, and onshore eco-geomorphological features through the use of super domains and morphometric analysis. This approach to coastal classification thus serves as a blueprint for the comprehensive characterization of coastal belts worldwide.

How much is membership?

We offer a variety of membership levels including print and online access for groups and individuals.  Visit the CERF-JCR membership page for full details.

When is the next ICS?

The International Coastal Symposium 2020 event, originally scheduled for April 20-23, 2020, was postponed due to the COVID-19 global health emergency. The Symposium is now re-scheduled for May 3-6, 2021 at Hotel Alfonso XIII in the city of Seville, Spain.

Can I get peer reviewed?

Contributions must be in the proper JCR manuscript format to be considered for peer review. Papers submitted that are not in this format will be returned unread.

Our coastal geology professionals are world renowned for their innovative research and published literature. Contact This email address is being protected from spambots. You need JavaScript enabled to view it. for more information.

What if I have a billing issue?

For any membership or billing issues, please contact This email address is being protected from spambots. You need JavaScript enabled to view it. for swift resolution.

Can I order back issues?

Past issues can be ordered from the JCR Back Issue archive for $50 USD each.  Browse JCR back issues from Volume 3 (1987) to present.